It looks like someone at Goodreads has their eyes and ears open. A while back, I talked about how there needs to be a rating/recommendation system for books similar to Netflix. Today, when I logged in to update my Goodreads account, I noticed a new box mentioning the number of books I’d rated with a link to book recommendations.

My first thought was, Has that always been there? Until I realized the giant site announcement: Announcing Goodreads Book Recommendations. (Answer: no, it hasn’t.)

Checking out the titles recommended for me, I’d say it’s fairly psychic so far because a few of the recommendations are books already on my want-list (or have read, enjoyed, but forgotten to add list). A nice touch is that whenever you hover over a book’s title, it gives you a little pop-out explaining what the book’s about and why it ended up on your recommendation list. 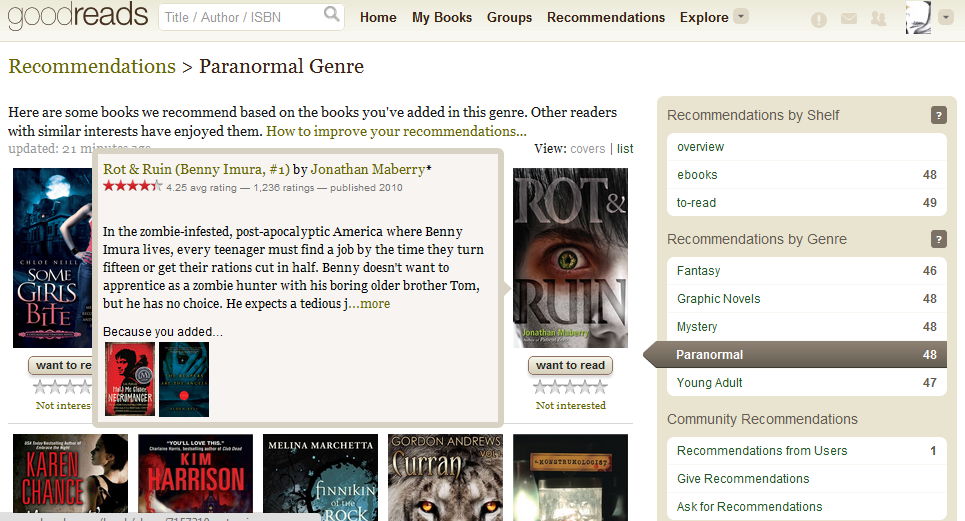 What concerns me, however, is that it ultimately won’t be as psychic as Netflix. And books do require more of a time investment than a movie or television show. Also it would have been nice if the new recommendation system offered a how much you’re likely to enjoy it star rating similar to Netflix.

Maybe in the future.

(Random thought: I figured Amazon would have been the first to jump on this, implementing their own Netflix-style recommendation system, but whatevs…I’m just glad someone is showing some initiative.)

This entry was posted in Everything Else and tagged goodreads, if wishes were pennies. Bookmark the permalink.