This post will stay at the top of the page until Dewey’s 24 Hr. Read-a-Thon is finished. It’s where I’ll periodically update on my progress and other musings. (I tweaked this page because it suddenly made more sense to add the most recent updates to the top. I know, my brain is mush. *sigh*)

For most people, there’s only one hour left in the read-a-thon. For me, however, since I got a late start, I’m going to continue reading for another hour past. Yeah, I get down like that.

In the meantime, I’m completing the end of the read-a-thon meme…

1. Which hour was most daunting for you? Hour 21 was looking mighty rough-ish for a minute. A few times I thought I would pass out…
2. Could you list a few high-interest books that you think could keep a Reader engaged for next year? Rotters by Daniel Kraus. Definitely. Um…beyond that…er…
3. Do you have any suggestions for how to improve the Read-a-thon next year? The only improvements are those I mentioned in the midway meme (about the localization and prominence of the participants list).
4. What do you think worked really well in this year’s Read-a-thon? The cheerleading. (My blog’s comment issues aside. *sigh*)
5. How many books did you read? 1.5 – in my defense, I spent most of the last 23 hours socializing.

10. How likely are you to participate in the Read-a-thon again? What role would you be likely to take next time? Very likely. Next time I’ll actually spend more time reading. (But I did like the cheerleading, so I’ll probably do some of that, too. Oh, yes, and hosting the mini challenges was fun, so yeah, add that to the list.)

Sorry the above answers are rambly, and borderline incoherent, but my brain has turned into pudding. I think. Or maybe gelatin. Wait, it doesn’t jiggle when I shake it. Yeah, pudding.

I’ve started Rotters by Daniel Kraus, but am nowhere near finished with it. Twitter and blogs keep distracting me. However, what I’ve read so far is freaking fantastic. I’m kicking myself in the butt for not starting the read-a-thon off with this one. But, c’est la vie.

Also, my first two official read-a-thon mini challenges are officially completed. It was so much fun to read all the responses (and yes, I read every single one) and learn about new books. My Wishlist has grown considerably. Thank you, a million times, thank you to all those who participated. The lucky winners (chosen by the mysterious random.org) are…

For the Character Crush mini challenge: Jessica from Nisaba Be Praised

The first man that popped into my head was Mr. Tilney from Northanger Abbey. The way he teases Catherine is just. So. Sexy. and I always felt his biggest flaw was falling in love with someone as undeveloped (mentally!) as her.

Or, you know, the Doctor.

(I’m totally crushing on The Doctor, too. He wouldn’t even be able to finish saying “Tardis” before I was packed and on board. I wonder, though, have there been any Doctor Who books written? Just checked. Yes, yes there have been.)

This is such an interesting challenge. I never actually thought about this, but let’s give it a try.

Movie to Book? Seven Pounds with Will Smith. It took me about six tries to actually make it through that movie, but once I did, I was blown away. There were so many emotional nuances in it and twists of fate. Now that I think about it, that definitely would have been one unforgettable book. Who would write it? Andre Dubus III. He wrote The House of Sand and Fog and when I think about Seven Pounds as a book, that’s the style that comes to mind. The more I think about it, the more I want Mr. Dubus to do it.

Book to Movie? This is a little trickier. Hum. Generation Dead by Daniel Waters and it would be directed by Edgar Wright, the guy who wrote/directed ‘Shaun of the Dead’. That would be a match made in heaven. Generation Dead is like a campy version of Twilight with zombies and I know Mr. Wright can do it right. Sorry for the bad pun.

Thanks for this challenge, it actually woke me up somewhat by making me think.

(I wholeheartedly agree on Generation Dead. That would be a fun book to see made into a movie, but I don’t know if Edgar Wright is the ideal directorial candidate. I loved Shaun of the Dead, too, but…of course, I’m sleep deprived so I’m not sure what I’m saying at this point. Must add Seven Pounds to my list of movies to see.)

Thanks again to everyone who participated.

OK, so it’s taken me nearly 11 full hours to finish one book. That’s ridiculous even by my own slow-reading standards. But, to be fair, I’ve been procrastinating for much of that 11 hours because…the book was not as awesometastic as I expected it to be. And the full truth is I’ve only spent about 3 of those hours actually reading. *facepalm*

Now it’s time to participate in the midway meme… 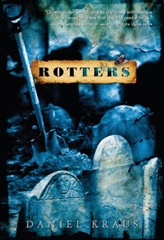 1. What are you reading right now? I just finished reading A Well-Timed Enchantment by Vivian Vande Velde and I’ll be starting Rotters by Daniel Kraus next.

2. How many books have you read so far? (shamefaced) 1…in my defense, it was much slower going than I’d planned. (See paragraph preceding this meme.)

3. What book are you most looking forward to for the second half of the Read-a-thon? It’s a tie between Rotters, which I’m starting next, and Wither by Lauren DeStefano.

4. Did you have to make any special arrangements to free up your whole day? Not really, surprisingly.

5. Have you had many interruptions? How did you deal with those? Only two and in both instances I just clicked on the “Don’t Accept” button on my phone.

6. What surprises you most about the Read-a-thon, so far? The awesomeness of the challenges. Seriously creative (and fun) ideas people.

7. Do you have any suggestions for how to improve the Read-a-thon next year? Make the list of participants easier to find for those who haven’t signed up as cheerleaders, but would still like to pop around every once in a while and cheer on the fellow read-a-thoners.

8. What would you do differently, as a Reader or a Cheerleader, if you were to do this again next year? N/A since I was only an amateur cheerleader…

9. Are you getting tired yet? Surprisingly, nope. Guess the Cherry Coke Zero’s working.

10. Do you have any tips for other Readers or Cheerleaders, something you think is working well for you that others may not have discovered? Keep the pages open in tabs, such as Twitter, The 24 Hr. Read-a-Thon homepage (and participant list), Facebook, and refresh as necessary. When visiting the blogs, open the links up in a new tab. Don’t know if that’s a new or even helpful tip, but there it is anyway.

In one fell swoop I’ve used up all of my allotted snack breaks. (Yes, I had a perfectly mapped out schedule and everything. I want to rock this reading challenge.) This morning, I panicked when I couldn’t find one of the books I’d planned to giveaway for one of the mini challenges. It’s still in hiding, but I figure I can just re-purchase it if necessary. No sense in delaying any further. 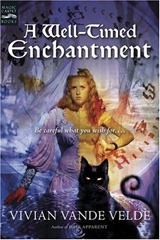 The first book on my reading schedule, as I munch on an Asiago cheese bagel with cream cheese and sip on my ice cold Cherry Coke Zero (I can just hear my mom’s voice telling me it’s too early in the morning for soda), is A Well-Timed Enchantment by Vivian Vande Velde.

It’s an unscheduled addition, but after finishing another book by Velde recently, I couldn’t resist when I saw this one sitting on the shelf. I guess I didn’t sacrifice all my snack breaks for nothing.

To answer the pre-read-a-thon questions…

1)Where are you reading from today? Sunny South Florida

2)Three random facts about me…

3)How many books do you have in your TBR pile for the next 24 hours? I had four books…then stumbled across another one this morning.

4)Do you have any goals for the read-a-thon (i.e. number of books, number of pages, number of hours, or number of comments on blogs)? Just read, go with the flow, have fun.

5)If you’re a veteran read-a-thoner, any advice for people doing this for the first time? Since I don’t consider myself a veteran, I’m going with N/A on this one.

This entry was posted in Reading and tagged 24 hr read-a-thon. Bookmark the permalink.