This challenge is officially closed. Thank you to everyone who participated; I loved reading about your character crushes. I’ll be selecting a winner shortly and will post it in an update.

Every so often I’ll come across a character in a book which makes me think, I would run away with him in a heartbeat, and I’m praying I’m not the only one. That’s why I’m hosting this particular mini challenge.

I want to hear about that character (or those characters) you’d pack up your current life to run away with, and why. Tell the world why that character is so charming to you and, if you feel so inclined, where you’d go. Make us want to run away with you! (Oh, and don’t forget to mention the book and author so our TBR piles can grow.)

At the end of the challenge, I’ll randomly select someone to choose 2 books from the list below or a single book from The Book Depository up to $12.97USD. Yes, this contest is open internationally if selecting from the prizes below, otherwise anywhere The Book Depository ships. However, to participate, you must be at least 13 years old. (It’s a privacy law thing.)

To enter, you can blog about your character crush, but please make sure to come back here and comment with a link to your post, or you can just leave your answer in the comments. Thanks for participating, and have fun.

This challenge will end in 3 hours @ Extended to 5AM EDT (sorry to everyone who tried to comment and couldn’t!)

Books to Choose From: 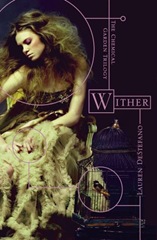 When sixteen-year-old Rhine is taken, she enters a world of wealth and privilege that both entices and terrifies her. She has everything she ever wanted—except freedom. With the help of Gabriel, a servant Rhine is growing dangerously attracted to, Rhine attempts to escape before it is too late.

Not all dreams are sweet. For seventeen-year-old Janie, getting sucked into other people’s dreams is getting old. Especially the falling dreams, the naked-but-nobody-notices dreams, and the sex-crazed dreams. Janie’s seen enough fantasy booty to last her a lifetime.

She can’t tell anybody about what she does—they’d never believe her, or worse, they’d think she’s a freak. So Janie lives on the fringe, cursed with an ability she doesn’t want and can’t control.

Then she falls into a gruesome nightmare, one that chills her to the bone. For the first time, Janie is more than a witness to someone else’s twisted psyche. She is a participant… 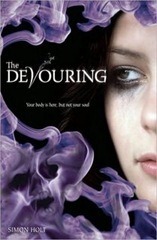 The Devouring by Simon Holt (Hardcover)

The Vours: Evil, demonic beings that inhabit human bodies on Sorry Night, the darkest hours of the winter solstice.

This isn’t how the horror ended for us—this is how it began.

When Reggie reads about the Vours in a mysterious old journal, she assumes they are just the musings of an anonymous lunatic. But when her little brother, Henry, begins to act strangely, it’s clear that these creatures exist beyond a madwoman’s imagination, and Reggie finds out what happens when fears come to life.

To save the people she loves, Reggie must learn to survive in a world of nightmares. Can she devour her own fears before they devour her?

In Charlaine Harris’s “Bacon,” a beautiful vampire joins forces with a witch from an ancient line to find out who killed her beloved husband. In “Seeing Eye” by Patricia Briggs, a blind witch helps sexy werewolf Tom Franklin find his missing brother—and ends up helping him in more ways than either of them ever expected. And in Jim Butcher’s “Last Call,” wizard Harry Dresden takes on the darkest of dark powers—the ones who dare to mess with his favorite beer.

Anyone who’s ever wondered what lies beyond the limits of reality, who’s imagined the secret spaces where witches wield fearsome magic, come and drink deep. Let yourself fall under the spell of this bewitching collection! 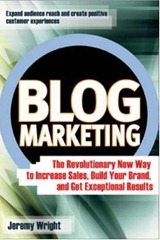 Today, tens of millions of bloggers are communicating on the Internet about companies, products, trends, and much more. Don’t miss out on the conversation! Blog Marketing explains how blogs are amazingly cost-effective tools for making business decisions based on actual customer feedback and market intelligence.

This entry was posted in Everything Else and tagged 24 hr read-a-thon, giveaways. Bookmark the permalink.